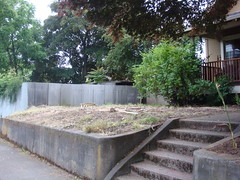 Cleared front yard
Originally uploaded by stereotype441
Five more pics behind the link
Yesterday's work party was a smashing success. Amariah, Jesse, Dan, Tara, Jenn, and Kenny showed up. We did an enormous amount of weeding in the front, clearing room for rototilling and irises. Jenn trimmed the bush in front of the house (can't remember what it's called) down to a manageable size. Daniel trimmed the hedge by the driveway. Kenny cut some dead branches off the tree in back. This all would have taken me weeks, and I would have had nowhere near as much fun.

Oh, and we drank beer and blasted music across the neighborhood. Afterward we played Rock Band and had dinner at Por Que Non.

Current plan (probably overly ambitious) for the front yard: tomatoes, peppers, zucchini, corn, beans, raspberries, and any other good ideas anyone manages to suggest before I start planting.

Hmm, the yard got overgrown because I couldn't find the time and energy to maintain it. So now I'm thinking of planting a huge vegetable garden. Yeah, definitely overly ambitious. I must be insane. Still, I can't wait.

Thank you all for helping!
Collapse